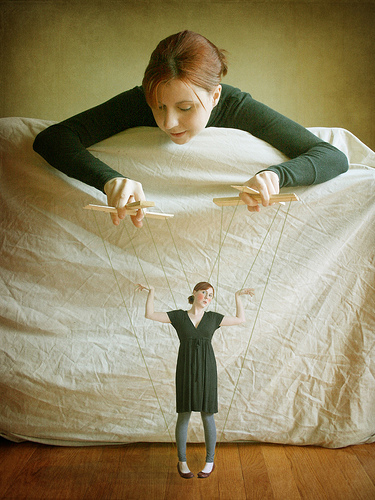 There’s been quite a bit of up-selling of independent pictures in Hollywood.

With the box office success of Slumdog Millionaire, indie films are the new darlings of the movie business after decades of being relegated to the wilderness of limited theatrical distribution and even more limited marketing budgets.

However, the studios never expected that their independent labels might produce pictures that would threaten to cannibalize their tent-pole productions.

Patrick Goldstein recently wrote in The Big Picture blog about Slumdog’s surprise performance and its likely chances of getting an Academy Award here. [Ed. Note: Goldstein’s post has since been removed but can now be found here].

After all, the irony of all ironies is that after giving “Slumdog” the bum’s rush, Warner Bros. spent millions running a best picture campaign for “The Dark Knight,” the highest-grossing film of 2008, which still ended up being largely ignored by Oscar voters, who failed to give it a best picture, best director or even a best original screenplay nomination.

The sad truth is that most studios today don’t have the patience, the artistic desire or the skilled manpower to release a film like “Slumdog.” My guess is that Warners, having unloaded all of its specialty divisions, both Picturehouse and WIP, eyed its little gem (made for a paltry $14 million) and said–even if we put in months of painstaking work, it’s at best a double (industry parlance for a modest hit). Like most studios today, Warners is an assembly line, built to swing for the fences, eager to make mega-hits like “The Dark Knight” or “Harry Potter,” which not only make far more money but feed the studio’s valuable ancillary markets.

Warners is not alone. 20th Century Fox has little in the way of artistic ambitions, preferring to hire no-name directors, leaving the Oscar game to its Searchlight subsidiary. The same goes for Disney, which is happy to let Pixar take home a best animated film statuette and let its tiny Miramax subsidiary, which spends a fraction of the money it did when Harvey Weinstein was at the helm, play in the awards sandbox. Even Sony, which used to avidly pursue awards, has largely given up, preferring to pursue more commercial goals.

It’s a great article and I was with Goldstein until he wrote:

Of this year’s best picture nominees, only two were made at major studios: “The Curious Case of Benjamin Button,” co-financed by Paramount and Warners, with Paramount distributing, and “Frost/Nixon,” which is distributed by Universal Pictures. “Slumdog,” along with “Milk” and “The Reader,” were financed outside the studio system or by specialty companies. More importantly, if you look at the recent best picture winners, they are invariably made by fiercely independent filmmakers who rarely take their cues from the studio system.

The Coen brothers, who directed last year’s winner, “No Country for Old Men,” are so leery of Hollywood that producer Scott Rudin had to cajole them into even coming to town for a few glad-handing events. The same goes for Martin Scorsese, a lifelong New Yorker who directed “The Departed,” the winner in 2007. Paul Haggis, who directed “Crash,” the 2006 winner, lives here, but as a director operates just as far away from the studio system as Scorsese or the Coens. Clint Eastwood, who won in 2005 with “Million Dollar Baby,” is the ultimate outsider, making his movies with the same crew in the same quiet fashion, brooking little interference from any studio suit.

While I am pleased to see that American (and global audiences) are demanding more sophisticated fare, I demurred in the comments section of my client, Jonathan Wakeham’s blog on film @ mastersvo.com. I wrote that:

For all their laudable (and at times, edgy) works, Scorsese, Rudin, Eastwood and even Haggis are part of the Hollywood establishment. Their involvement in a project can easily (relatively speaking) drive financing of a project. Saying that these pictures are truly independently financed . . . is like calling a wolf in sheep’s clothing a ewe.

While Slumdog is not a litmus test of what truly independent projects can accomplish given meaningful theatrical distribution and a real marketing budget, it does prove that audiences have a big appetite for original stories in an industry that insists on being increasingly derivative and increasingly risk-adverse.

And that’s a pretty happy ending in itself.