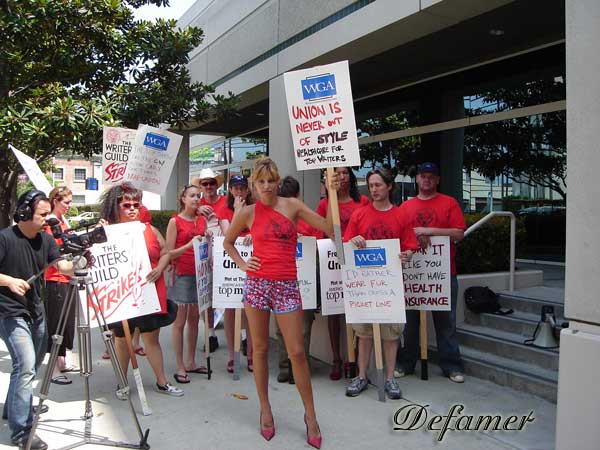 The WGA is ratcheting up the rhetoric by recently issuing hardline rules to its 12,000 members if the guild goes on strike as threatened. In today’s Daily Variety, Nick Counter confirmed that the rules the WGA issued last week include “bans on writing animated features and for the Internet, even though those arenas are largely not under WGA jurisdiction. The strike rules bar any writing for struck companies, delivering any material or signing documents relating to writing assignments; they compel members to honor guild picket lines, perform assigned strike support duties and reporting strike-breaking activity. Discipline for violations can include expulsion, suspension, fines and censure; nonmembers who perform banned work during a strike will be barred from joining the WGA.”

I expressed my concerns regarding an actual strike earlier this week here. As I suggested, the WGA is following a fear of loss strategy; just not the way I envisioned. The WGA is threatening its own members with expulsion and other severe penalties and barring non-WGA writers from future membership if they work during the strike under certain circumstances. Although somewhat draconian, the WGA’s strategy serves several goals. It’s a shot over the bow with the studios and networks and it ensures that the guild’s members actually honor the picket lines. In my previous post, I linked to an article about last month’s taxi strike in New York, which failed in part because many drivers continued to work during the strike. If striking proves to be ineffective, the Guild’s negotiating leverage can be even more diminished than had they not gone on strike at all.

Several writer and producer reps I spoke with yesterday during negotiations (reps like to digress into other subjects in an attempt to regain leverage) believe that the Guild’s strike rules may be unenforceable; especially against non-WGA members. Frankly, it smacks of restraint of trade to me but that’s not my bailiwick.

As I noted in my earlier post, the threat of a strike is having a dramatic effect on the pace and terms of negotiations with writers. This week brought new surprises, with reps on deals I was negotiating demanding contractual pledges that their writers work through any strike and extending force majeure terms to ensure that a long term strike is covered. As with the WGA’s strike rules, strike breaking pledges probably raise enforceability concerns.

Such fears are carrying the day. I look forward with some trepidation to the outcome of all of this like a driver stuck in traffic easing up to a bad car accident.